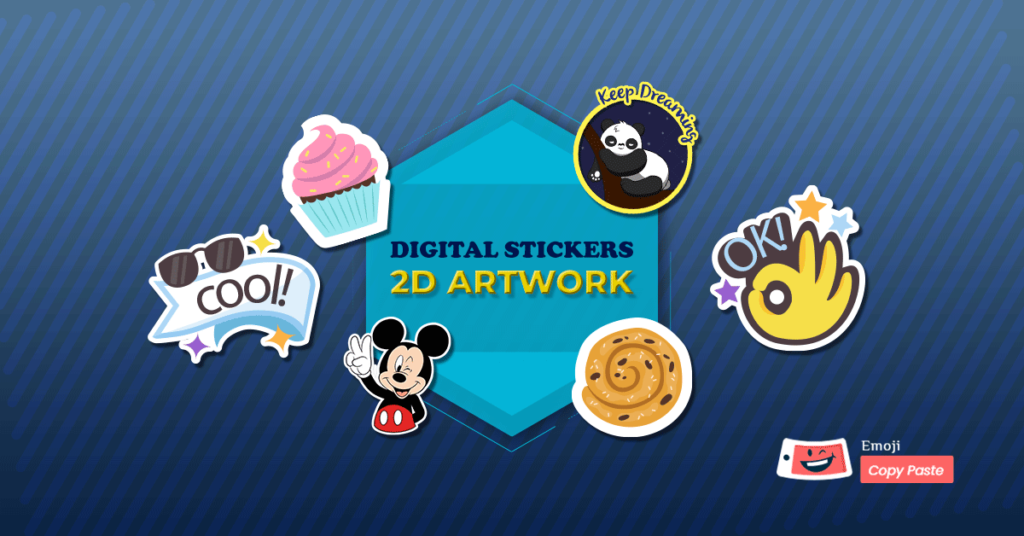 Social media is always coming up with new ways for people to connect in their daily lives. “Digital Stickers” is one of the new things to do.

Most stickers are pieces of printed paper, plastic, vinyl, or other materials that stick to themselves. It depends on the situation in which, uses as decorations or to do something useful. Because technology has changed, this idea has changed. People now use digital stickers to show how they feel or how they feel about something to the person they are talking to.

Shinto Okukawa, who is the managing director of Quan International, traveled all the way from Japan to show his art at the “Exposition of Internet Art Exhibition” at the Pallete Artspace in Thonglor. The goal of the exhibition is to show the seven most-downloaded characters in Thailand and give fans a chance to meet the artists who made them.

Here are some of the most well-known ones:

• Business Fish: A person with a fishy head who always finds a way not to work.

• Usagyuuun: It is a white rabbit who likes to move in strange ways to make people laugh.

• Betakkuma: Betakkuma, the White Bear with a human body, is a strange creature.

• Sugar Cubs: These are the bears who were born to be loved.

•Piyomaru: Piyomaru is a chick who likes to walk and has a free spirit.

• Elissy: A girl with a picture book.

The exhibitor chooses the word “exposition,” which means “showing, revealing, expressing, and presenting the core of an idea.” The main purpose of the show is to show large digital paintings of the characters. Shinto said, “If we do something artistic, our work will be worth a lot more than just a digital sticker.” “When artists make something for social media, they spend a lot of time and thought on it, but people can enjoy it in just 5 or 10 seconds. We actually spend a lot more time than that. So why don’t we do something to make the artists’ work more valuable?” He kept going.

There have been exhibitions in Japan and Korea, but the biggest one will be held in Thailand from February 8 to March 8, 2020, at the Pallete Artspace in Thonglor, Bangkok. Fans can go to the show to get their favorite artists’ signatures. There are also a lot of fun things to do on the weekends, like workshops and live painting shows.

Digital stickers bring in a lot of money for artists

Sasaki Sakiji’s first Line sticker was for the woman who would become his wife. Stickers, which look more like cartoons than emojis, are a big part of using Line, which is the most popular messaging app in Japan, Taiwan, and Thailand. People use them in place of text or to show how they feel. In the manga style, they are usually framed by exclamations and show cute animals or weird caricatures. As with many creator economies, there are many ways to make money in the marketplace on Line. Only a small number of people can go their own way, get a lot of fans, and make six-figure incomes from revenue-sharing and sponsorship deals. The line says that 154 creators have made more than 100 million yen ($865,000) from selling stickers directly so far.

You might think of the gold stars kids get for doing a good job in kindergarten when you hear the word “sticker.” Rest of World says that stickers are what make Line, which is the most popular messaging app in Japan, Taiwan, and Thailand, a place where people can make money.

What kind of stickers are these?

Stickers are manga-style cartoons that people can use to show who they are. Most of the time, people send messages through the line. Stickers are a faster and more interesting way to communicate because they have more characters than emojis. Line started making its own stickers in 2011, but when the company opened its marketplace to creators in 2014, the sticker economy really took off.

In 2020, stickers alone brought in $200 million for Line, and 4 million designers made stickers on the platform.

Here’s how it all comes together

According to Artists – the most popular characters are set in their ways, which makes it harder for new characters to stand out. On the other hand, Line has been on both sides. It has talked about how creators can make digital stickers and also said that helping new creators is one of its biggest challenges. At this point, if a new designer makes a popular sticker that gets noticed, they get a gold star.