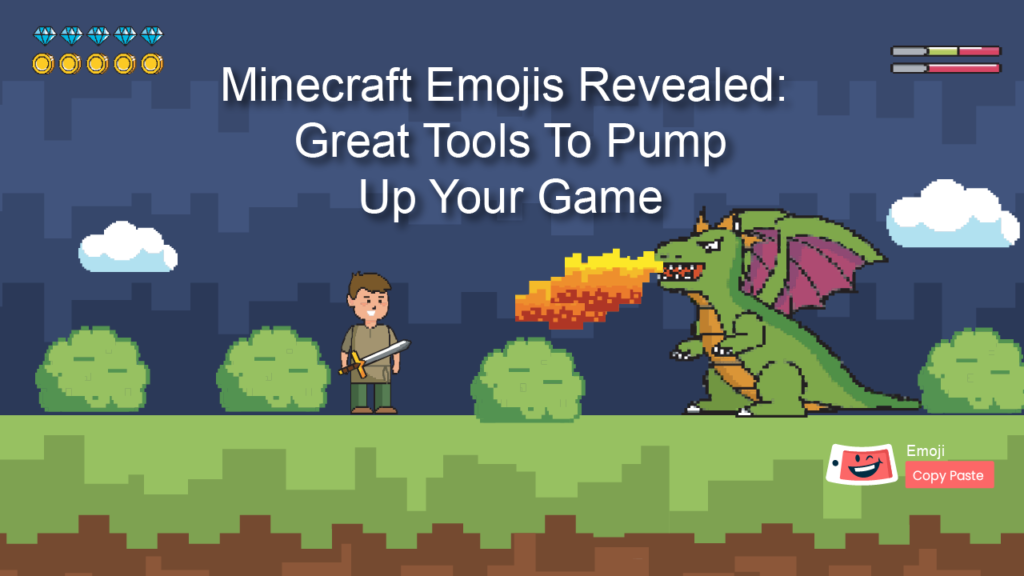 Minecraft is a computer game with different modes. In this game, players have to get resources to build their cities, houses, and world. This game makes use of textures with a resolution of 1616 pixels and the computer-generated world consists completely of objects made of blocks. It has a lot of hard-coded Private Use Unicode symbols that immediately change to Emojis-like symbols. You can easily use them anywhere where standard letters can.

It is one of the most famous video games with more than 238 million copies sold and 126 million once-a-month users. In the previous year, Minecraft broke its own records, hitting more than 166 million gamers in August 2021 alone. No other game reaches its huge success and popularity.

The main goal of this game is very simple and you can describe it in three words: explore, construct, and survive. In this game, players make 3D landscapes out of different kinds of blocks, and then they produce goods in their new establishment. It has rare rules, limitations, boundaries, or restrictions. There are no instructions given by the game. Players find unique features and rules by themselves, such as Minecraft emoji. You can play this game alone or with buddies.

Great Tools To Pump Up Your Game

It is very simple to make Minecraft emojis pop up in your game once you have the emojis list endorsed by Minecraft. You have to just click on the desired emoticon or symbol to copy. After opening Minecraft, press the key “T” to open chat. If you are using windows then press CTRL+ V, or if you’re using Mac to paste the emoji then press CMD+ V.

In the next section, Minecraft-related emojis are introduced. You can use these emojis while talking about Minecraft online. You can easily get the most out of your game with these Minecraft emojis separated by category.

Food and drink emojis are important to survival in Minecraft. Because the players that do not fill themselves with food ultimately die. Hunger consumes the food bar of gamers and ultimately kills them if they are in Hard mode. Players are impacted by nature in hard mode like drowning and being hit by lava, etc. Some common emoticons you’d encounter are 🥕 Carrot, 🍏 Green Apple, 🍪 Cookie, 🥛 Glass of Milk, 🍉 Watermelon, 🥧 Pie, and 🍄 Mushroom.

In Minecraft, flowers arise naturally. They’re primarily used as decoration and in dye recipes. At the same time, trees are necessary and usually used as building blocks in this game. Each player first has to dig up a tree and then they can start mining. In Minecraft, these plants and nature emojis you’d encounter 🌷 Tulip, 🥀 Wilted Rose, 🌼 Daisy, 🌳 Tree, or 🔥 Fire.

You need some of the best weapons to remain alive in Minecraft. Weapons let you guard yourself in opposition to the many players and mobs that are looking to destroy you. Mobs are Al-driven game bodies that look like the live creators. It is the abbreviation of Mobile Entity. These are the weapons that you’d encounter ⚔️ Crossed Swords, 🏹 Bow and Arrow, and 🔱 Trident.

Advance your game with the most useful objects and tools in the Minecraft world. The objects and tools that you’d encounter in the game are ⛏ Pickaxe, 💎 Diamond, 🏠 House, 🏠 House, and 🧱 Brick. Here are the other 16 kinds of blocks to elaborate further: Wood, Stone, Gravel, Clay, Snow, Cobblestone, Moss Stone, Obsidian, Coal, Iron Ore, Gold Ore, Diamond Ore, Redstone Ore, Lapis Lazuli, Netherrack, or Glowstone.

In the Minecraft game, every animal serves a clear purpose. This could consist of anything from becoming a player’s companion to letting go of a certain resource. Nevertheless, specific animals are only just aesthetically attractive, and that would be it. The animals you’d encounter in the game are 🐄 Cow, 🐝 Honeybee, 🐑 Sheep,  🐖 Pig, 🐓 Chicken, 🐈 Cat, 🦊 Fox, 🐠 Tropical Fish, 🐺 Wolf, 🦜 Parrot, 🐬 Dolphin, and 🦙 Llama.